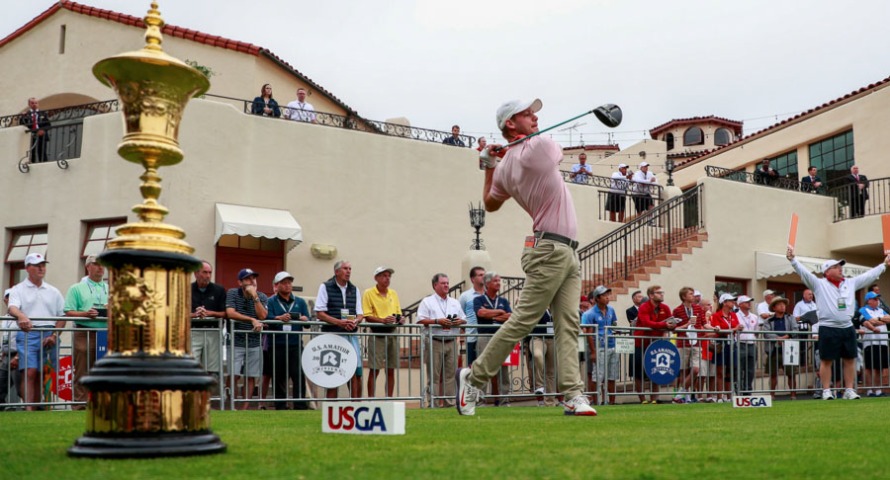 Doc Redman begins a 37 hole day to become US Amateur champion. (Photo from the USGA)

Like the football team does after important road wins, Doc Redman might want to pick up a little turf from the 10th hole at Riviera.

The rising Clemson sophomore won his way into match play on the 10th hole and in the final match won the US Amateur championship in a playoff on the same 10th hole.

Doug Ghim had Redman dormie going to the tee on the 17th hole. The University of Texas golfer had finally gotten the lead over Redman and needed just a win or halve one of the last two holes to be the US Amateur champion.

Redman  didn’t feel pressure on the final two holes and the playoff hole. Instead he felt privileged. Privileged to be in a situation where he had done something good enough to bring the pressure down on him.

Redman kept the quote from a coach in his mind in pressure situations all week. “It is a privilege to feel the pressure coming down 18 with a chance to send it to extra holes,” said the Clemson golfer.

The Tiger sophomore earned the “privilege  of the pressure” on the final hole of his 36 hole match with Ghim.

Clemson golfer Doc Redman reacts to one of the many outstanding putts he made in the final round of the US Amateur. (USGA Photo)

The sophomore from Raleigh drained an amazing 60 foot eagle putt on the par-5 17th hole.

At the time Redman was 2 down with Ghim.

The eagle on 17 cut Ghim’s led to just one hole with the final hole to play.

On 18 Redman nailed his second shot to the green just seven feet from the pin. He was able to convert the birdie putt and evened the match to send it to a playoff.

“I’ve tried a lot to make all 10-footers equal no matter if they’re to win a match or to stay alive in the match, because I think that makes a huge difference,” he said. 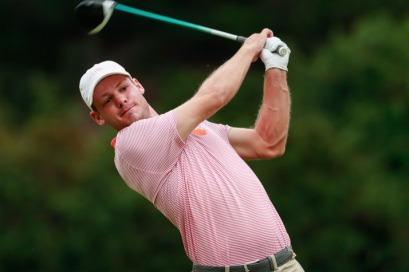 When Redman teed off in the playoff it was the second time during the week he was forced to play extra holes.

The third-team All-American had to win his way out of a 13 for 8 playoff just to make the match play field.

“I just wanted to get through because I new if match play came that I could do it, you know, I could win some matches and advance,” Redman said.

He had proved his ability in a match play format with a runner-up finish at the prestigious Western Amateur just a couple of weeks before the US Am.

Redman was four down through nine in the finals before he rallied to have a chance to win on the 18th hole. His putt slid by the hole and the title was decided in a four-hole playoff won by Norman Xiong over Redman.

The playoff hole was number 10 and Ghim’s tee shot on a drivable par-4 found trouble. Redman split the fairway and hit his second shot close enough for a birdie try.

Ghim had tree trouble and then went from sand trap to sand trap before conceding the hole, the match and the championship to Redman.

Doc Redman celebrates his victory in the US Amateur. (Photo from the USGA)

“It is incredible to add my name to the list of all the incredible champions. I beat some of the best players in the world and I hope that this can catapult me up into that conversation as well going forward,” he said.

Redman is the second Clemson golfer to win the US Amateur championship. Chris Patton won the 1989 title at the Merion Golf Club

Immediately after the final Redman was informed that he had been selected to the Walker Cup team. Both he and Ghim made the all-star squad that will play against an amateur team from Great Britain and Ireland.

Redman will be back in Los Angeles early next month to compete in the matches at the Los Angeles Country Club.

He also will have two spring tournaments added to his schedule. His win in the US Am means he will be invited to play in The Masters next April and he also receives an exemption to play in the US Open in June.