Kelly and Novak move up at Q School 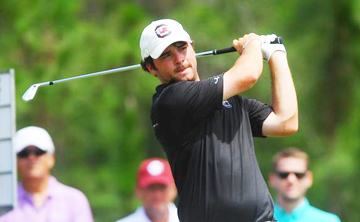 USC grad Sean Kelly is in the top-10 after two rounds of the Web.com Qualifying tournament in Arizona.

Former USC golfer Sean Kelley shot a 9-under par 63 to move into the top-10 after the second round of the Web.com final Qualifying tournament in Chandler, Arizona.

Kelly moved up 45 places after opening the tournament with a 1-under par 71.

Wofford grad Andrew Novak did a little better moving up 46 places after his second round score was posted.

Novak opened the tournament with an even par 72, but shaved 7 strokes off par to shoot a second round 65. He is now tied for 24th at the halfway point in the tournament.

Wofford grad Andrew Novak moved up 46 spots at the Web.com Qualifying tournament after shooting a 65 in the second round.

First round leader Jose Toledo shot an opening round 61. His second round was a 2-under par 70 to stand at 13 under par. Toledo is tied with Curtis Luck who shot a second round 64 to go with his first round 67 and have a 131 total going into the weekend.

The winner of the Qualifying tournament gets to play the full Web.com season as an exempt player.

Golfers who finish between number 2 and number 10 will be exempt to play in the first 12 events of the new season.

Finishers between number 11 and number 45 are exempt for the first 12 events of the 2018 Tour.

The remaining players in the final receive conditional Web.com status.