Reona Hirai has the lead after two rounds of the Clemson Invitational. (file photo)

Furman followed up a record tying first round, with a record setting second round at the Clemson Invitational.

Furman shot a 277 team total on Friday and set a new low round record for the program with a 15-under par 273 total on Saturday at The Reserve at Lake Keowee.

The Lady Paladins have a two round total of 550 and is 26-under par.

Furman was not the only team to set a new school record. The host Tigers finished the second round with a 276 total to set a team record and stand in second place nine shots behind the Lady Paladins.

Reona Hirai, who was in second place after the first round, shot a 4-under par 68 to take over the individual lead. The Furman senior is 9-under par going into the final round.

Hirai and her four teammates all finished in the top-15. Alice Chen carded the best round of the day with a 5-under par 67 to move up to third place at 7-under par for the tournament.

All five Furman golfers shot in the 60s. Natalie Srinivasan is tied for 7th place after shooting  her second straight 3-under par 69. Jacqueline Bendrick also posted a 69 to be in a tie for 10th place while Haylee Harford also finished the day at 3-under par to be tied for 15th. 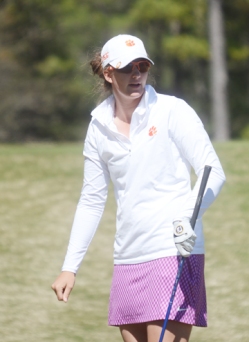 Also helping the Tigers to a record setting day was Alice Hewson. The All-ACC golfer shot a 3-under par 69 to be in ninth place and Ana Paula Valdes shot a 4-under par 68 to move up 36 places.

The final round begins with a shotgun start at 8 AM Sunday. Live scoring is available at http://www.golfstat.com.