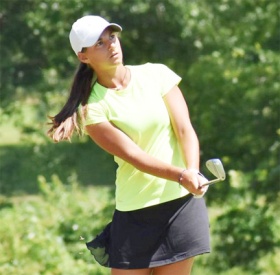 Spartanburg’s Elle Johnson is the first round leader at the South Carolina AAAAA championship. Johnson is the defending champion. (Golfclub File Photo)

Defending state AAAAA champion Elle Johnson from Spartanburg is on top of the individual standings after the first round of the state championship.

The tournament is being played at the Mid-Carolina Golf Club in Prosperity.

Johnson shot a 1-under par 72. The  Viking’s golfer is the only player in the field to post an under par score in the first round.

Isabella Rawl from Lexington and Adrian Anderson from St. James are second and third respectively.

Lexington  is on the verge of winning their third straight AAAAA girls team title and 13th championship for the school. 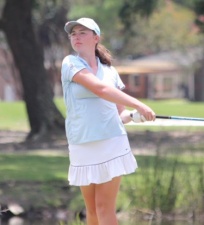 MK Talledo from Boiling Springs helped the Bulldogs to third place after the first round.

defending champions to a 19 shot lead over the Upper State champions from Blythewood.

MK Talledo is tied for fourth and helped her Boiling Springs team to third place, one shot behind Blythewood.

The top three teams Lexington, Blythewood and Boiling Springs will be paired together for the final round.

The three teams begin their play on Tuesday starting at 10:28 off the first tee.

Johnson starts her final round at 9am on the 10th tee

Complete scoring is available at https://birdiefire.com/tournament/51944/

Ashley Looper from Travelers Rest is tied for second place after the first round of the AAAA championship. (Golfclub file photo)

Two upstate teams have pulled away from the rest of the field to lead the AAAA championship after the first round. The tournament is being played at Coastal Carolina’s Hackler Course in Conway.

Daniel, the Upper State champion, shot a team total of 334 to lead their neighbors from Pickens by four shots.

A.C. Flora is in third place and trails the two Upstate teams by 32 shots going into Tuesday’s final round.

Emma Charles has the individual lead after shooting a 71. The Hartsville golfer has a three shot lead over Ashley Looper of Travelers Rest and Kennedy McGaha of Belton – Honea Path.

Two golfers from Pickens round out the top five individuals. Rachel Page shot a 77 for fourth place and Jordan Deck carded a 78 to finish fifth after the first round.

The top Daniel individual is Gillian O’Brien who shot a 79 to lead her team to first place. 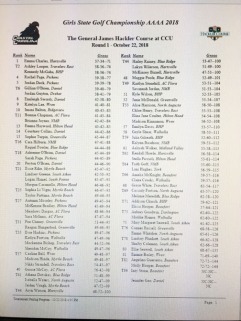 Jensen Castle has the individual lead at the AAA-AA-A championship after shooting a first round 4-under par 68 at Carolina Springs.

The Landsharks have a 39 shot lead over Gilbert after the first round of the AAA-AA-A championship at Carolina Springs. Oceanside shot a first round 307 while Gilbert posted a 346 total.

Bishop England has a one shot lead over St. Joseph’s for the third spot on the team leader board with Chesnee and Chapman tied for fifth.

The individual championship could be a battle between the Castle sisters from Gray Collegiate. Jenson Castle has the individual lead after shooting 4-under par 68 at the Simpsonville course.

Her sister, Jaylen, posted a 1-over par 73 and is second in the individual standings.

Three Landshark golfers are in the top-10. Gabriela Martinez shot a 74 for third place while Rachel Rich and Kayla Bartemeyer each finished with a 75 in a third place tie.

The first year Chesnee golf team was led by Sydney Roberts who shot a 76 and is in seventh place going into the final round.