Weather prevented the Big South from completing the match play finals of the conference championship on Friday.

Top seeded Campbell holds a 3-1-1 lead over Winthrop with their match at the half way point when weather forced the suspension of play.

The semi final matches will resume play around 8 am on Saturday with the championship to be played immediately after the completion of the suspended matches. 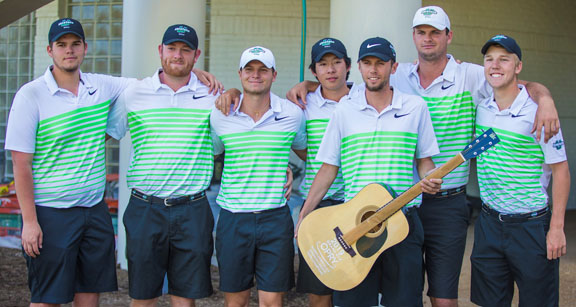 USC Upstate tuned up for the Big South Championship with a win at the Ryman Hospitality Intercollegiate in Nashville.

The Spartans topped a field of 16 teams to record their second win of the year. The team won the Camden Intercollegiate in the fall.

Jordan Warnock finished second in the individual portion of the event while Matt Carter and Hunter Fry finished in a tie for 7th place.

Coming off the win the Spartans finished second in the stroke play portion of the Big South Golf Championship at The Patriot Golf Club near Ninety Six.

Upstate shot a final round 287 to slip by Gardner-Webb and finish second in the tournament and earn the second seed in the match play final.

Upstate’s Reid Bedell and Jordan Warnock finished sixth and seventh in the individual competition to help lift the Spartans into match play.

Matt Carter and Hunter Fry both finished within the top 15.