Austin Scott won a playoff for the SCGA Junior championship at The Country Club of Lexington. (GolfClub Photo)

There is an old movie titled a ‘Shot in the Dark’. The 2019 South Carolina Golf Association Junior championship turned into more than one ‘shot in the dark.’

The 61st Heritage Foundation SCGA Junior Championship, being played this year at The Country Club of Lexington, suffered through heavy rain to start the week and difficult playing conditions in the final round.

The championship lost the first round to weather and slow play caused by the conditions meant the leaders, who teed off last in the final round, finished regulation play after 7 pm.

First round co leaders Brandon Masters from Piedmont and Austin Scott from Daniel Island each posted 5-under par rounds of 67.

The two leaders had a one shot advantage over South Carolina AAAAA High School champion Zach Rueland from Rock Hill who won his high school championship on the same Lexington course in May.

First round co-leader Brandon Masters from Piedmont finished in a tie for 7th place.. (GolfClub Photo)

Masters fell out of the lead early in his final round and was replaced as a challenger by JT Herman.

The Hilton Head golfer shot a 3-under par final round 69 to finish at 5-under par and hold the clubhouse lead with only one more group on the course..

Scott and Rueland came to the final two holes with a one shot lead over Herman and the two golfers stood at 6-under par..

Rueland’s tee shot on the par 3, 17th hole found a green side bunker. His escape shot went long and he suffered a double bogey to drop back to 4-under par.

Scott had a 12 foot par putt, but missed his chance to take the outright lead when the ball shot past the hole.

“I would have liked to have that one back,” he said. “I just hit it too hard,” said Scott who came to the final hole at 5-under par.

Herman was not able to birdie the par 5 finishing hole, but Scott’s third shot left the Bishop England High School golfer with a 17 foot birdie chance.

“Towards the end I knew where everyone stood and I just tried to focus on every shot” he said.

Scott settled for a par and joined Herman in a playoff that did not begin until after 7 pm.

The field was scheduled to be cut after the first 36 holes, but since the tournament was only going to be 36 holes the full field of 157 golfers played the final round.

Ordinarily there would have been enough daylight to finish without a problem, however because of rain, mist and overcast conditions play was very slow and daylight vanished earlier than usual.

Both golfers parred the first playoff hole. On the second hole Scott striped his tee shot down the middle of the fairway. Herman pulled his drive into a group of trees near a creek.

Herman did not find his ball until well after the 3 minutes allowed by the new USGA rules had expired. He was forced to continue play as if he had lost his ball.

With Scott in the middle of the fairway Herman had to go back to the tee to hit his third shot after the penalty.

This time he found the fairway and was able to put his fourth shot on the green leaving Scott with a big advantage.

JT Herman from Hilton Head earned a spot in a pllayoff with a final round 3-under par 69. )GolfClub Photo)

Scott had landed his second shot on the green, 20 feet from the pin. He made a two put par to win his first major individual title.

“I played pretty well this week. Most of the week my putting was good and that helped me,” said the winner.

Scott was a member of the Bishop England golf team that won the state AAA championship in May. The team title was the biggest win the high school junior has been a part of as a junior.

“Winning this is awesome. Going into the playoff I didn’t know what it was going to be like. It was lucky the rain was not too bad. It feels good to win,” said Scott. 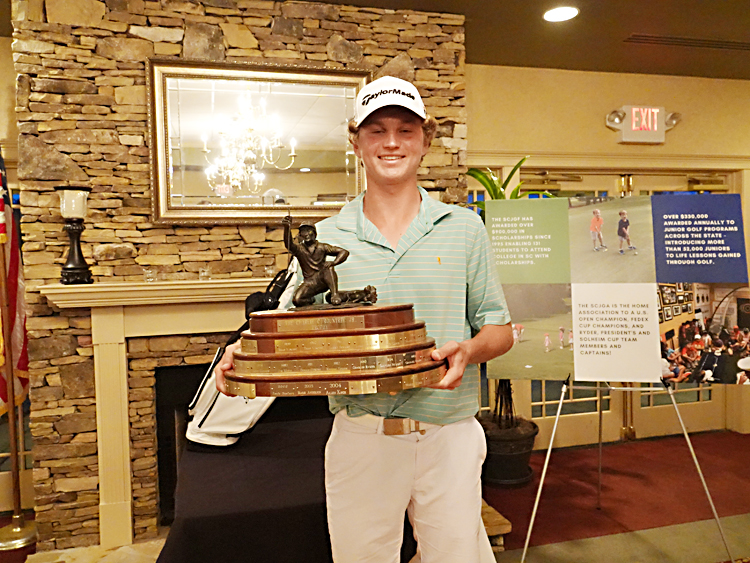 Greenville’s Rafe Reynolds and Woodruff’s Daniel Brasington finished in a tie for 7th place with first round co-leader Masters.

The 13-14 year old championship was won by Jerry Bruns from Beaufort who finished one shot in front of Adam Hunt from Columbia.

Andrew Gregory from Boiling Springs finished third while William Jennings from Greenville was fourth in the younger age group competition.