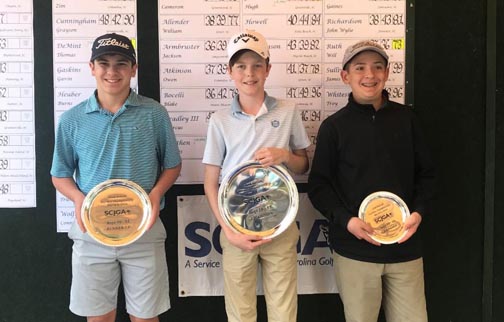 Hugh Faulkner (center) of Greenville won the SCJGA Pee Wee Championship at the Columbia Country Club. Charles Cauthen and Will Ruth finished second and third in the 10-12 year old division.

A pair of Upstate golfers came home from Columbia with the state’s Pee Wee titles in hand.

Hugh Faulkner of Greenville won the boys 10-12 year old age group title while Davis Petty from Spartanburg was the champion of the boys 8-9 year old division.

Playing at the Columbia Country Club on an age appropriate course set up, Faulkner carded a 3-under par 65.

Charles Cauthen of Columbia finished second at 3-over par while Will Ruth from Moore was third after shooting a 5-over par 73. 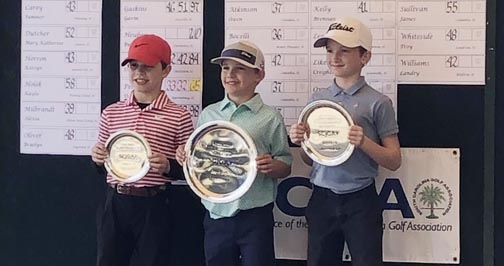 Petty finished his nine holes with a 4-under par 64 to win his age group by 5-shots over Connor Wolfe of Blythewood while Greenville’s Thomas DeMint finished in third place after shooting a78.

Summer Carey from Manning was second with Karsyn Herron from Graniteville in third place.

Weston Bell and Robert Lutomski repeated as champions of the SCGA Partners tournament played at Spring Valley Country Club and the Club at Woodcreek.

The defending champions are now the two time champions as Weston Bell and Robert Lutomski teamed up to win the SCGA Partners Championship again.

Bell and Lutomski broke out of a tie with the team of Kevin Roberts and Josh Branyon when they matched their first round score of 61 in the second round.

The two Upstate golfers edged out Branyon and Roberts by a shot when the first round co-leaders shot a 62 in the final round.

The team of Josh McMillan and Stan Sill from Spartanburg tied with Caulder Moore and Sam Moore along with Barry and Brent Roof for third place.

The Tournament Division championship was won by the team of Jeff Burgess from Greenville and Ian Gohearn from Leesville.

The two teamed up to shoot a second round 8-under par 64 to go along with their opening round 64 to finish at 12-under par.

The winners second round 8-under par score helped them pass the opening round leaders Landis Lane and Quentin Yarborough from Florence for the championship.

Five teams tied for third place in the championship played at Spring Valley Country Club and the Club at Woodcreek.