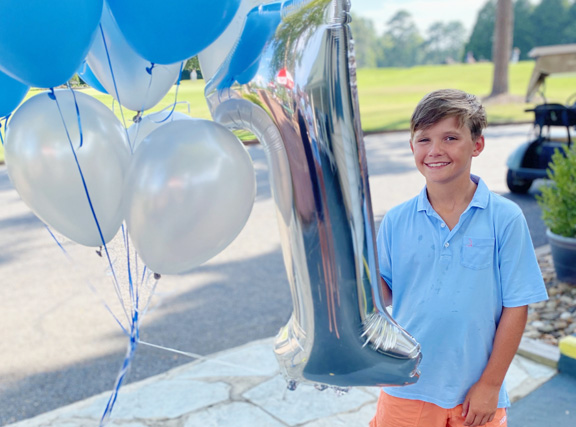 When you are 9-years old and already have a world championship on your resume, you have to be, well on top of the world.

Spartanburg’s Davis Petty wrapped up a win in the US Kids 9-year old world championship at Pinehurst #1 on Saturday.

With those kind of scores you might think it was just a walk in the park to the championship for Petty.

Instead he got off to a rough start in the first round and was 2-over after 12 holes.

The young golfer turned it around with a strong finish. In the next six holes he made an eagle and then birdied his final three holes.

His first round 3-under par 69 kept him within three shots of Bento Assis, one of the stars of the US Kids championships.

In the second round, Assis struggled while Petty played better shooting a second round 4-under par 68 to take the tournament lead.

In the final round Petty played a solid round finishing with a 2-under par 70 to finish in front of Assis and Connor Wolfe from Blythewood.

“He was so calm and wasn’t overwhelmed by the size and situation at Pinehurst,” said his coach Chip Ridley, who is the PGA Professional at The Creek Golf Club. “He played three rounds without taking a big number. He didn’t make anything bigger than a bogey. He played great,” he said.

Even at a very young age Petty is no stranger to success at Pinehurst in the US Kids World Championships.

A win in one of the US Kids age group division is no guarantee of future success on the golf course, but it is a pretty good indicator.

One of the last young golfers from the Upstate to win a US Kids World Championship was a then 8 year old Trent Phillips from Boiling Springs.

Phillips grew up to dominate junior golf in South Carolina and this past spring was named a first team All-American after his sophomore year at Georgia.

The Golf Club profiled Petty last summer. Here is a link the story on this website.https://wp.me/p4IcRa-1Yl

Petty consistently plays up one age group level at tournaments.

So far this summer Petty has won every Hootie & the Blowfish Summer Series tournament he has played.

Two other young golfers from the Upstate competed in the 9 year old division at the US Kids championships.