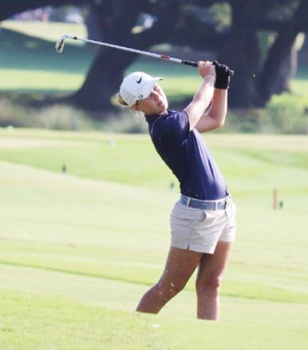 Chloe Holder held the lead going into the final round of the Beth Daniel Junior Azalea. (SCJGA Photo)

With the quality of the field at the Beth Daniel Junior Azalea no one should be surprised that the leader board tightened up in the second round.

Chloe Holder from Williamston saw her 4-shot first round lead cut in half in the second round.

Holder opened the tournament with a 5-under par 66. She carded a 1-under par 70 in the second round to now hold a 2-shot lead.

Isabella Rawl from Lexington shot a 3-under par 68 for a two-day total of 4-under par 138 to be alone in second place.

Sydney Roberts tied Rawl for the low round of the day.  The Chesnee golfer improved 5-shots from her first round to move into a tie for third place with Lexington’s Molly Hardwick at 1-under par.

Murrells Inlet’s Adrian Anderson and Emma Schimpf from Daniel Island are tied for fifth going into the final round at The Country Club of Charleston.

Gene Zeigler held the first round lead by himself, but after the second round he has company on top of the leaderboard.

Zeigler shot an impressive 5-under par 66 to go along with his first round 65 for a 131 total and a share of the lead.

Charlie Kennedy from Richmond, Virginia blistered the course carding 8 pars and no bogeys for a 63 to move up from 5th place to tie Zeigler.

The scoreboard again was covered with red numbers as 16-golfers posted under par scores in the second round.

The field was cut after the round. The boys cut fell at 4-over par while the girls cut was at 8-over par.

Scores are available at https://scjga.bluegolf.com/bluegolf/scjga20/event/scjga2017/contest/1/leaderboard.htm