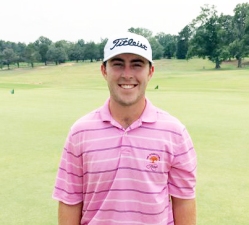 Clemson golfer Austin Langdale off an 18 under par performance at the Rice Planters Amateur kept his streak of good golf going by shooting a 5-under par 67 to win the SCGA Amateur qualifier at the Greenwood Country Club.

Langdale finished a shot in front of Jeremy Revis and Thomas Todd both of Greenville.

Jeremy Revis tied with Thomas Todd as the runner-ups in the SCGA Amateur qualifying tournament at the Greenwood Country Club.

Thirty-six golfers qualified to play in the SCGA Amateur to be played at the Greenville Country Club’s Chanticleer Course starting on August 6th.

There are three more qualifying tournaments to fill the field for the Amateur.

Lake Marion Golf Course in Santee will hold the next qualifier on July 8th.

Cobblestone Park in Blythewood will hold a qualifier on July 13th.

The final qualifier will be played on July 15th at Woodfin Ridge in Inman.

There are 36 golfers exempt from the qualifying process for the state amateur.

Complete Scores from the Qualifying event at Greenwood