It was a good day to be wearing purple as the Furman Lady Paladins and the Converse Valkyries both won golf tournaments.

The Lady Paladins won their second tournament of the season and have now finished in the top-3 of every event they have played this year. (photo from Furman)

The Lady Paladins earned their second team win of the season with a dominating performance at the Central District Invitational hosted by Michigan St in Port St. Lucie, Florida.

Furman finished the first round with a 5 shot lead and led the field by 14 shots after the first 36 holes. The Lady Paladins didn’t let up in the final round and finished out the tournament with a winning margin of 23 shots over Louisville.

Furman had just missed a win in the opening tournament of the spring season at the Women’s Puerto Rico Classic. The 7th ranked Lady Paladins had finished in a tie for second place keeping their season long string of finishing no worse than third place in every tournament alive.

“I am very excited about this win,” said Furman head coach Jeff Hull.  “After coming so close last week, I was very pleased with the focus and determination to get the job done.  Finishing the event at even par and winning by 23 shots is something to be very proud of.  I was also very excited for Alice, as she gained her first collegiate win,” he added. 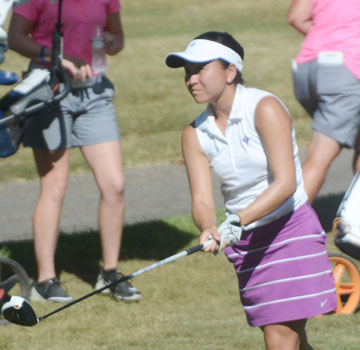 Chen started the final round one shot behind teammate Taylor Totland.  The Lady Paladin Junior finished one shot in front of Michaela Fletcher of Memphis for the victory. Chen was the only golfer to finish under par for the tournament.

Furman placed four golfers in the top six places and all five golfers finished in the top-15. Totland finished in third place while Natalie Srinivasan finished in fifth place. Haylee Harford shot a 1-under par 71 to claim sixth place and Reona Hirai finished the tournament in a tie for fourteenth place.

The Lady Paladins will next play in the prestigious Darius Rucker Intercollegiate at Hilton Head starting on March 3rd. The tournament is hosted by South Carolina and played at the Long Cove Club. The field is one of the strongest fields in women’s college golf

Converse College won their own tournament at the Carolina Country Club. (photo from Converse)

The Converse Valkyries put together their best team round of the season as the host team won their own Converse Spring Invite presented by Founders Federal Credit Union at the Carolina Country Club in Spartanburg.

Converse started the final round in third place trailing first round leader Kings University and the second place team from Lincoln Memorial. Converse shot an opening round 318 to trail the leader by three shots.

In the final round the Valkyries combined to shoot a 309 total to finish the 36 hole event at 627. The outstanding final round allowed Converse to climb into first place and win the tournament by 4-shots over the first round leader.

The Valkries were led by Marley Felthousen. The Converse senior held the first round lead by shooting a 73 and earned the individual title with a final round 76. She finished one shot in front of Alexa Rippy of Trevecca Nazariene University.

Felthousen won the tournament as a freshman and finished as the runner-up last year.

Tyler Dawson had the best final round for Converse shooting a 2-over par 74 to help her team to the title. Megan Dresser finished in 12th place while Ansley Vaughan and Grace Magera.

Converse will next play in the Pfeiffer Invitational starting on March 8th at Hilton Head Lakes.