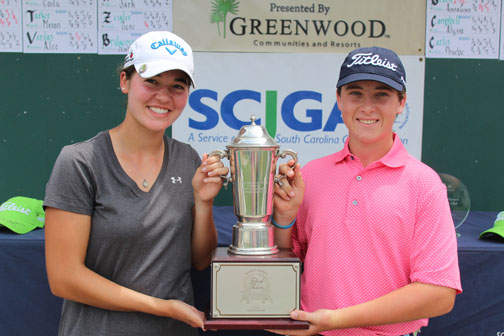 Carly Lyvers and Daniel Azallion won girls and boys championships at the Jimmy Self Junior Festival of Flowers. (SCJGA phot)

The summer junior golf season started with the Jimmy Self Junior Festival of Flowers at the Greenwood Country Club.

The tournament is often an opportunity for some young juniors to make an early mark on the competitive summer junior schedule in South Carolina.

Two young golfers took advantage of the opportunity and came away with victories.

Carly Lyvers of Simpsonville had the first round lead and never let anyone catch her as she won her first major South Carolina Junior Golf Association championship.

In the boys competition Daniel Azallion of Hilton Head made up a four-stroke deficit to edge out Trent Phillips of Inman and Dixon Flowers of Sumter by a shot for his first SCJGA Major. 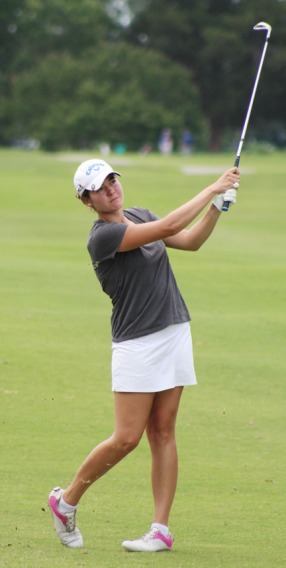 Carly Lyvers of Simpsonville won the Jimmy Self tournament by two shots for her first major SCJGA championship. (SCJGA Photo)

Lyvers has been close to winning a SCJGA event before, but never seemed able to put everything together at the right time, until this week.

“This was the kind of start I was hoping for this summer,” said the St. Joseph’s rising senior. “I’ve been working really hard on my game and it feels great to play this solid for two days,” she said.

Lyvers held the first round lead after shooting a 1-over par 73. She was one shot ahead of Baylee Evans of Lancaster, the defending WSCGA Girls champion, and two shots in front of Phoebe Carles of Clinton.

The future James Madison University golfer had five birdies and six bogeys in the first round. She started the second day in the same manner. Lyvers birdied the first hole and bogeyed the second hole, but still held her lead.

“I guess I felt a little pressure because this was the first time I ever had a lead going into the final round. I didn’t get upset when I made the bogey. I just settled down and made a stretch of pars,” she said.

While Evans and Carles fell off the pace Anna Grace Brock of Greenwood posted a 1-under par round of 71 to move into second place. She would finish as the runner-up two shots behind the winner.

Lyvers two-day total of 1-over par earned her the victory and also an invitation to play in The Blade Junior at Thornblade Club next month.

After Brock, Evans was third with Emily Dunlap of Mauldin in fourth place and Greenville’s Peyton Gillespie finishing fifth.

In the boys championship Azallion needed to climb over seven golfers to get to the top of the leader board. Two-time SCJGA Player of the Year Trent Phillips of Inman along with Walker Jones of Sumter and Garrett Cooper of Chesnee were tied for the first round lead at 3-under par 69.

Daniel Azallion won his first SCJGA Major championship. He won the Jimmy Self boys championship by a shot. (Photo from the SCJGA)

Nathan Franks from Roebuck was one shot behind the leaders and one-shot in front of Azallion and three other golfers.

“I had a game plan for the final round and I stuck to it,” said Azallion. “I needed to birdie the par-5s. If I didn’t think I could birdie a hole I had to take the right line and hit my targets,” he said.

The Hilton Head golfer birdied the first hole, a par-five, and finished the front nine at one-under par. On the back nine he carded four birdies, none on the par-5 holes, to finish with a tournament best five-under par 67.

“I gained a lot of confidence when I won the Jimmy Anderson Invitational. It was a pretty good field and I won that tournament by a stroke too,” he said.

Phillips, who has a history of coming from behind the leaders to win, didn’t make a birdie until the final two holes. He finished in a tie for second place with Dixon Flowers of Sumter, who shot a four-under par 68 for a 139 total.

Azallion didn’t do any scoreboard watching or listening. His parents knew how he stood in the tournament, but he didn’t want them to tell him.

“I knew it was going to take a low score to finish in front of Phillips and the other good golfers. I just wanted to play my best and add things up at the end,” said the Hilton Head Christian golfer.

Azallion hopes the win will give him some momentum going into the South Carolina Junior Championship this week at the Columbia Country Club.

“I hope this helps me next week, but to get this win is pretty big for me,” he concluded.

Emily Dunlap made a hole-in-one during the final round of the Jimmy Self at the Greenwood Country Club. (Photo from the SCJGA)

Emily Dunlap of Mauldin made a hole-in-one during the final round of the tournament. Dunlap made the ace on the fourteenth hole from 138 yards.