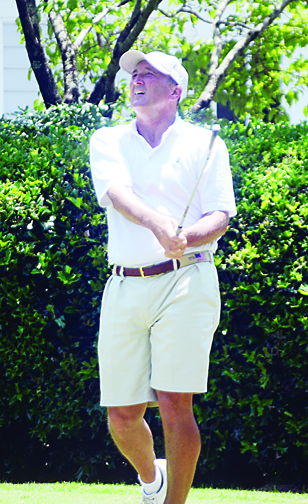 Todd White shot an 8-under par 64 to lead the first round of stroke play at the CGA South Carolina Match Play championship. (File Photo)

Todd White often refers to himself as an old timer when it comes to competing in amateur golf events.

At the CGA South Carolina Match Play championship the fact that White has a few years on his competitors is clear, but it didn’t seem to matter on the scorecard.

He holds a four shot lead over two golfers whose combined age is still five years less than White’s.

The 2013 Walker Cup player would like to duplicate the feat he accomplished 29 years ago when he was the stroke play medalist in this tournament played on this same course.

White got off to a quick start when he eagled the par-4 second hole from 110 yards out. He didn’t cut another stroke from par until the back nine when he made seven birdies.

“I hit my wedges really well,” said White. “I had a couple of tap-ins which always helps to get everything started,” he said.

Nick Russell of Hilton Head, who is 19, shot a 4-under par 68 to be in second place. Russell started his round with a double-bogey, but bounced back with an eagle and three birdies.

“I just wanted to stick to my game plan of hitting fairways and hitting greens,” said Russell. “My putting was really good today and I was driving it well, so I hope to keep it up going into tomorrow,” he said.

Shane Rogen of Columbia is 25 years old and is third after shooting a 3-under par 69.

Five golfers are tied for fourth place. Thomas Todd of Laurens, Stan Sill of Spartanburg, Brady Hinkle of Lancaster, Thompson McClure of Little River and Matt O’Quinn of Beaufort all shot rounds of 2-under par 70.

The qualifying medalist gets the second spot in the 32 player bracket for match play. Defending champion, Furman golfer, Connor Bruns gets the top spot in the field.

The three victories White has in the tournament has him tied with Barry Black of Spartanburg and Bert Atkinson of Charleston for the most wins in the match play event.

“I have been very fortunate to win three of these. To say that I have not thought about trying to separate myself from them; I would be misleading someone,” joked White. “I have put myself in good position tomorrow to go out and try to get a good seed for match play,” he added.