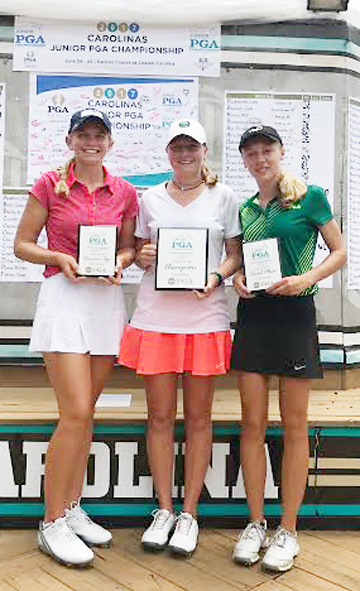 Anna Morgan didn’t make a bogey in her first round at the Carolinas PGA Junior. Her 2-under par round of 70 gave her a five shot lead that she never gave up.

“It was the first time I played a round with no bogeys and no mistakes,” said the Spartanburg High School golfer. “I was able to take advantage of my good shots,” she said.

Her second round score was also a 2-under par 70, but it was accomplished in a different way.

“I missed some shots, but they were all good misses. I didn’t hurt myself with the bad shots and I was able to put together a good round,” she said.

Morgan who admits to occasionally being a little nervous on the course surprised herself with how in control she was in the final round.

“Normally I get pretty nervous, but I was really calm in the final round. I guess having a five-shot lead helped. I wanted to play my own game and not let up and allow anyone to catch up with me,” she said.

Smith Knaffle of Murrell’s Inlet shot the best round of the tournament on the final day. Her 5-under par 67 moved her up to second place, but second place was still 7-shots behind Morgan.

The win was the second in the last month for Morgan. She won the WSCGA Girls Green Valley Classic at the end of May. She also posted a third place finish in the CGA’s Vicki DiSantis Junior. 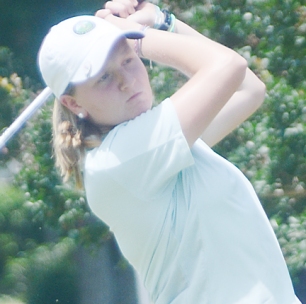 In June, Morgan competed against a field of college players and women amateurs in the Womens South Carolina Golf Association Amateur championship at Thornblade and came within a shot of winning.

“I am excited to win, but I don’t want to get ahead of myself. It can go away as fast as it gets here,” said Morgan.

The win at the Hackler Course in Conway earned Morgan a trip to the National PGA Junior which will be played in St. Louis starting on July 18th.

This week Morgan will compete in the CGA’s Twin State girls championship in Greensboro.