Trent Phillips shot a 7-under par to hold the first round lead at the Junior Azalea. (File  photo(

Inman golfer Trent Phillips has been playing in some very big national events in the last month. After teeing it up in the US Junior and the PGA Junior Phillips returned to play in Charleston at the Beth Daniel Junior Azalea.

The future Georgia golfer shot a 7-under par 64 to take a three shot lead into the final round.

Gaffney golfer Zack Gordon is in second place. Gordon, a future Clemson golfer, won the CGA SC Match Play title and this past weekend he finished tied for fourth at the South Carolina Amateur.

JJ Keene and Chad Carter are tied for third place after shooting 3-under par rounds of 68. 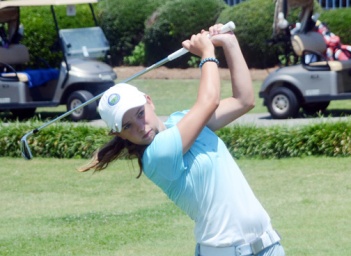 Baylee Evans has a one shot lead in the girls division. (File Photo)

Baylee Evans of Lancaster has the lead in the girls division. Evans shot an even par round of 71 to take a one shot advantage over a pair of golfers.

Anna Grace Brock and Alyssa Campbell are tied for third place one shot behind the leader.