Two of the best junior golfers from South Carolina will be on the world stage as the Junior Presidents Cup matches begin. 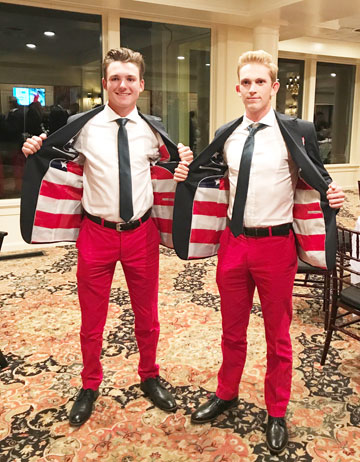 Trent Phillips and Jacob Bridgeman show off their Junior Presidents Cup blazers before one of the social events connected with the tournament.

Trent Phillips and Jacob Bridgeman both from Inman and both playing our of Woodfin Ridge will be in action in the first round.

“I guess we are putting Inman on the map,” said Bridgeman. “Somebody who doesn’t know much about South Carolina might look and see the two of us and think Inman is a big place with a lot of golfers,” Bridgeman said.

It is hard to believe that Inman, South Carolina with a population of a little over 2,000 people and Woodfin Ridge Golf Club with a membership of around 250 has produced two of the twelve USA players in the first ever Junior President’s Cup.

“I’ve played team golf in high school, but never anything like this. I think this is going to be a fun experience,” said Phillips.

The two Palmetto State juniors were selected to play on the team after their top-10 finishes at the Junior PGA Championship.

“You want a chance to make a name for yourself on a national stage like this. Even when you are ranked up high you can always do better,” said Phillips.

Phillips and Bridgeman will team up to play with a pair of international golfers who are ranked among the best juniors.

Sean Maruyama and Karl Vilips will be playing for the International team, but both are US residents and soon to be college players in this country.

Maruyama is from Encino, California. He is in the class of 2018 and has made a commitment to UCLA to play college golf.

His parter in the first round Four-Ball Matches is Karl Villips of Australia. Villips now lives in Wesley Chapel, Florida. The young golfer is considered the top prospect in the 2020 class.

Villips has already made a commitment to play college golf at Stanford after high school.

Phillips has committed to Georgia while Bridgeman is a Clemson commitment after the two finish high school.

Monday afternoon the golfers will play Foursome Matches and on Tuesday they will play Singles Matches.

The Junior Presidents Cup is being held at the Plainfield Country Club in New Jersey. After the juniors play at the club the Presidents Cup teams will take over the course.

Among the golfers playing on the professional level event are also two golfers from South Carolina as Dustin Johnson from Columbia and Kevin Kisner from Aiken will be on the team.