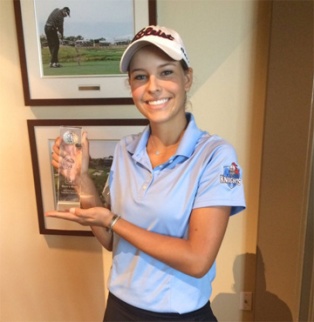 Alex Swayne is one of three new recruits for the Clemson women’s golf program.

The third new recruit has an accomplishment neither of the two has on their record or for that fact any player on the Clemson team.

Alex Swayne from Maineville, Ohio has a win at Augusta National on her resume.

No, she didn’t win The Masters, instead she won the 2015 Drive, Chip and Putt national contest at the same course and same year Jordan Spieth won his green jacket.

Alex Swayne was a winner at Augusta in the first year of the PGA Drive, Chip and Putt Contest.

Swayne was a finalist for the PGA and August National sponsored contest that included almost 50,000 entrants from around the country.

Swayne won the 14 year old division title in the first year of the contest. She got a very nice trophy presented to her by Augusta National Chairman Billy Payne.

Alex Swayne and 3-time Masters Champion Nick Faldo shared an interview on The Golf Channel after she won the Drive, Chip and Putt contest at Augusta in 2015.

She didn’t win a green jacket, but got to share a Golf Channel interview with three-time Masters Champion Nick Faldo.

Swayne had already showed great promise in junior golf, she earned All-City honors in Cincinnati as a freshman.

After her trip to Augusta, Swayne has kept adding to her golf resume.

This year she won the AJGA Junior at Penn State and the 15-18 year old Junior Championship at the NRC Golf Club in Dayton.

She had made her commitment to come to Clemson earlier this year. She told the local Cincinnati newspaper that part of her visit included rubbing Howard’s Rock at the top of the hill in Death Valley.

Now since she is much closer to Augusta, instead of just chipping and putting she may one day get a chance to play the course.