Roberts and Renner win at Smithfields 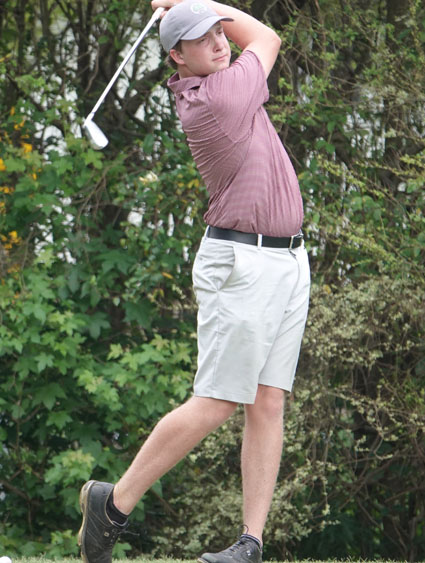 Lleyton Renner shot a final round 2-under par 70 to win the Upstate Junior at Smithfields.

Sidney Roberts and LLeyton Renner won the overal titles at the Upstate Junior played at Smithfields Country Club in Easley.

Roberts won the girls title shooting identical rounds of 78 for a 156 total.

Renner edged out Trey Howard by two shots after carding the best round of the tournament. His final round 2 under par 70  earned the Mauldin golfer an even par finish at 144.

But 10 % of the field were also winners. Young golfers who finished at the top of the tournament will receive an invitaiton to The Blade Junior Classic in July.

Renner opened the tournament with a 2-over par 74. He trailed first round leader Nick Srinivasan from Spartanbnurg by a shot and was tied with two other golfers.

In the second round Renner and Howard were in the same group and as other golfers dropped off the pace the two seemed to play match play for the last five holes.

“I was keeping his card so I knew what he was doing,” said Renner. “We were even at number 15, but after that I had an advantage,” he said.

Renner finished off his final hole and claimed the championship and a trip to The Blade.

“On the final hole I stayed left of the trees, hit a six iron and then dropped a 52 degree wedge on the green and made the putt” he said.

Renner won a GSA Tournament at Pickens last year shooting a 69, but he believed his final round 70 and the win at Smithfields would top his list of accomplishments.

Trey Howard finished two shots back to be the runner-up at the Upstate Junior.

“To win the tournament was great and to get into The Blade makes it even better,” said the boys overall champion.

Howard finished as the runner-up for the second time this week.

The Woodruff golfer finished in second at the Spartanburg County Junior. In the tournament at Three Pines Country Club Howard posted the best tournamnebnt round of his career shooting an 8-under par 63 in the first round,

Like Renner making it into The Blade provied a lot of the motivation for the Woodruff golfer to play well again this week.

“I thought I would be in, but I didn’t want to take a chance so I played in this tournament,” said Howard.

Howard shot the only other under par score in the tournament posting a 1-under par 71 in the final round.

“I wanted to win the tournament, but making sure I am in The Blade is just as important for me. The Blade is a great tournament and I am looking forward to playing it,” said Howard.

The tournament which will be played at Green Valley Country Club this year while Thornblade Club prepares for the state amateur is the favorite event for state juniors.

“Playing in The Blade is fun, but it also gets you noticed,” said the risiing high school junior who hopes to play college golf. 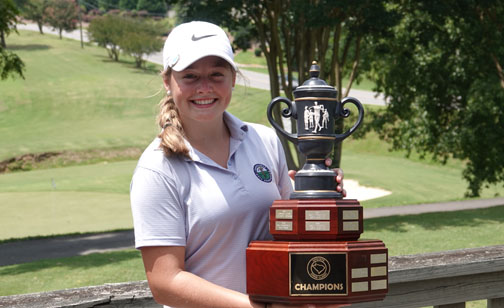 Sydney Roberts added an overall championship to the age group title she won last year with the girls championship at the Upstate Junior.

Sydney Roberts added the overall title to the age group championship she won last year at the tournament.

The Chesnee golfer held a lead over Ashley Looper after the first round.

Roberts survived  a triple bogey in the first round. She got one of the shots back with a birdie on the very next hole. Even with the triple she was able to take a 3-shot lead into the final round.

No one in the field was able to make a run at the leader and Roberts claimed the win by 9-shots.

“I kept the ball in the fairway and hit a lot of greens today,” said Roberts.

Roberts claimed a win during the last high school season with a victory at the Lady Rebel. Adding an overal championship at Smithfields was an important victory for the rising sophomore at Chesnee High School.

“The greens were pretty hard so I had to hit different shots into them,” she said. “I made a lot of putts and played well in the final round” she said.

Ashton Eubanks won the boys 13-15 year old division title, Eubanks shot rounds of 79 and 78 for a 157 total. Jamal Hutchinson finished second in the division with a 163 total.

The girls 11-13 year old division was won by Mattie Padgett. Padgett shot rounds of 82 and 84 for a 166 total. Maddie Peake finished second in the division.

The Upstate Junior Classic is one of the longest running club sponsored junior championship in the state. During the 28 year history of the championship a number of future college golfers have won the titles. Among past winners was PGA Tour professional Kevin Kisner.