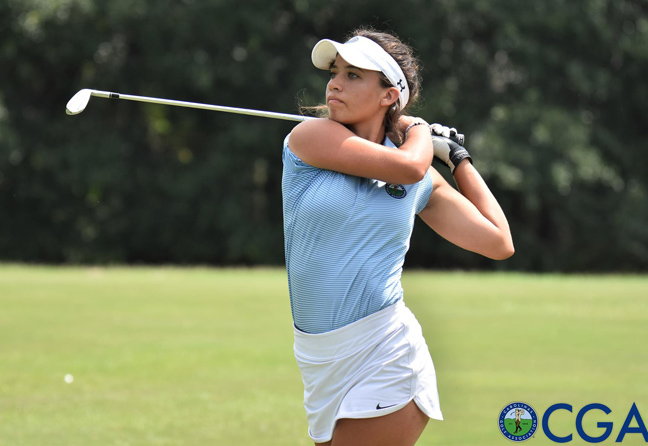 Pheobe Carles added a second important championship to her summer resume when she collected the title at the Carolinas Golf Association’s South Carolina Match Play Championship.

Carles, from Clinton, claimed the championship with a 19 hole victory over Anna Grace Brock from Greenwood.

The future Gamecock golfer won the WSCGA Foundation Junior championship title at Stoney Point in May.

Carles earned the win in the CGA Major championship by battling back not once, but twice from two hole deficits.

“I was down two through four and again down two through 11 so I started off really shaky,” said Carles. “I just wasn’t striking the ball as well as I have been the past two days and Anna Grace was really consistent,” she said.

The final match started to turn in Carles favor on the 11th hole.

“I made a birdie on 11 and then followed that with another on 12 to really get the momentum back up and going,” said Carles.

The two golfers played the next two holes even, but on the 15th hole Carles made a birdie to go one up on Brock with only three holes to play.

Brock evened the match with a birdie on the very next hole and the two finalists finished the regulation 18 holes tied.

On the 19th hole Carles was able to convert her par put and win the match on the extra hole.

“At no point today did I think ‘I’ve got this in the bag’, like at all,” said Carles as she reiterated how surprised and happy she is to be the champion after such a nail biting match. “It means a lot to me to win this championship. It feels like a lot of my hard work lately has finally paid off so I am really happy, she said.

Carles defeated Jennifer Rials of Florence 8&7 in her first round match. She defeated Gillian O’Brien from Clemson in the second round 4&2 to gain her spot in the finals.

The Boys championship was won by Mason Tucker of Lancaster, S.C. who won a convincing victory over William Phipps from Florence.

Tucker won the boys title 5&4 victory in the tournament played at the Berkeley Country Club in Moncks Corner.