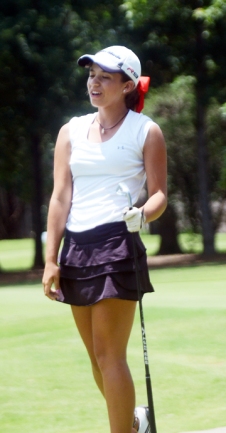 It is difficult to consider almost any win an upset at the 40th CGA South Carolina Junior Match Play championship.

However, two matches could qualify as coming close to being called just that, one in the girls division and one in the boys bracket.

On the girls side, Phoebe Carles was the eighth seed. The Clinton golfer knocked off the defending champion and top seed Alyssia Campbell from Lake Wylie in a quarter-final match.

Carles went on a run to claim three holes en route to a 4&3 victory after the turn.

“I was trying to stay away from the big numbers and make sure to come away with as many pars as I could,” said Carles.

The 15 year old golfer will face Jalen Castle of West Columbia in a semi-final match.

Faulconer was seeded 18th while Sloop, who was a finalist last year, was seeded second.

Faulconer went on to earn a spot in the semi-finals with a win over Keegan Vaugh of Myrtle Beach.

Ian Faulconer, from Greenville, defeated Manning Sloop, the tournament medalist, in a round of 16 match. (File Photo)

In the closest match of the day Elle Johnson of Inman topped Emily Dunlap of Mauldin in 19 holes to advance to the semi-finals.

Johnson will face girls medalist Katie Whitfield of Clemson in the semi-finals.

Zack Gordon from Gaffney will be the hometown favorite at Cherokee National.

The future Clemson golfer defeated  Austin Scott of Myrtle Beach in a round of 16 match. He then defeated Tyler Gray from Lugoff 3&2.

“I just kept taking it hole-by-hole,” said Gordon. “I just kept hitting shots and they went in,” he said.

Gordon will match up with Brady Hinkle from Lancaster. The defending champion won his way into the semi-final with a victory over Garrett Cooper of Chesnee 6&5.

“It is going to be tough [to beat Hinkle]. I am going to have to make a lot of birdies to have a chance,” said the Gaffney golfer.

The semi-finals begin at 8 am with the finals scheduled to start around 12:30 pm.