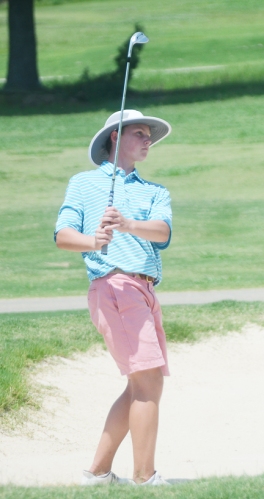 Manning Sloop chipped in a birdie from the sand on the final hole to earn medalist honors.

Katie Whitfield shot the only under par round in the girls qualifying tournament to claim medalist honors at the CGA South Carolina Junior Match Play championship.

Manning Sloop made a pitch in birdie from a trap on the 18th hole to win the medal as the top boys qualifier at the the tournament being played at Cherokee National in Gaffney.

Hinkle won his opening round match taking a 2 up victory over Nathan Franks of Roebuck.

The left-handed Sloop got a narrow victory over Zander Briggs of Simpsonville by a 2&1 margin.

Zack Gordon from Gaffney and Reed Bentley from Welford tied for second place in the stroke play qualifying tournament.

Each golfer was able to keep their momentum going with wins in first round matches. Gordon, the future Clemson golfer, topped Ontario Jones of Simpsonville 4&3 to advance to the round of 16.

Future College of Charleston golfer Bentley earned a 3&2 win over Mason Tucker of Lancaster to also advance to the next round.

All three Gaffney area golfers were able to advance to match play and win their first round matches on their home course.

In addition to Gordon, Seth Taylor won his opening match with a 5&4 decision over Zach Reuland of Rock Hill.

Cody Transou was in contention for one of the top spots in the match play bracket, but he carded a disastrous 11 on his final hole to drop to the 21st spot.

The Gaffney High School golfer gathered himself in his first round match and won a convincing 7&5 victory over Parker Lewis of Spartanburg. 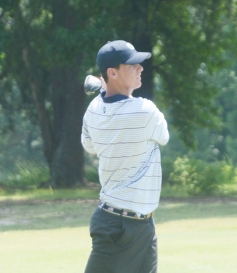 Zach Gordon along with Gaffney High School teammates Seth Taylor and Cody Transou have all advanced to the round of 16 on their home course.

The girls first round matches include an interesting pairing. Jensen and Jalen Castle of West Columbia will face each other in a round of sixteen match on Thursday morning.

The boys and girls will play two matches on Thursday. The round of 16 will be played in the morning and then the quarter finals will be completed in the afternoon.

The semi-finals and finals are scheduled for Friday at Cherokee National.

The CGA bracket is available here