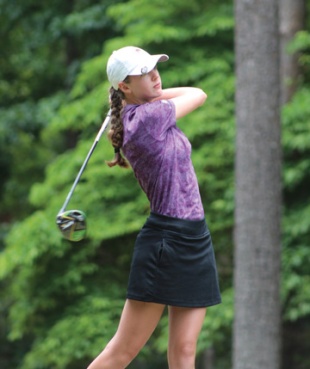 When the first round of the Women’s South Carolina Golf Association’s Junior championship ended at Mt Vintage Plantation in North Augusta Adrian Anderson was eight shots behind the leader.

But when the Murrells Inlet golfer began the second round she didn’t think about cutting into the big lead, instead she played the way she hopes to play every round.

“I just kept my head down and played one shot at a time,” Anderson said. “I just wanted to stay in the moment and not get ahead of myself. I didn’t want to know where I was because I didn’t want to be distracted,” she said.

Anderson’s game plan worked. She posted an even par round of 72 to take over the tournament lead by 1-shot and followed it up in the final round with a 2-under par 70 for a 217 total and the championship.

The win was the first major individual championship for the young golfer who had been a member of the St. James golf team that won two state titles.

“This is the first time I’ve won on a big course like this one at 6,000 yards. I’ve won a few smaller local tournaments, but this is my biggest win, so far,” she said.

The rising junior opened the tournament with a 3-over par 75, while Isabella Britt was shooting a sensational 5-under par 67.

Like many golfers who shoot lights out, Britt found out it is hard to follow up a great round with another.

The Chesnee golfer’s second round 81 dropped her into second place and her final round 4-over par 76 left her in a three-way tie for third place.

Lexington’s Molly Hardwick shot a 2-under par 70 while defending champion Chloe Holder from Williamston posted a 1-under par 71 to finish in a tie with Britt.

If not for some second round putting problems Britt’s Chesnee High School teammate Sydney Roberts might have been able to threaten Anderson’s lead.

Isabella Britt shot an opening round 5-under par 67 and finished tied for third place, (WSCGA Photo)

The rising high school junior struggled to get the ball in the hole during the first half of the second round.

Roberts recorded six bogeys on the first nine holes and finished with a 6-over par 78 to trail Anderson by 2-shots going into the final round.

“I hit the ball pretty good every day, but I just didn’t make some of the putts I usually make,” said Roberts. “I’m pretty happy with the way I played in the tournament. I just wish I had made a few more putts,” she said.

Anderson believed the key to her first big win was her iron play. She was amazingly accurate with her shots into the greens.

“I had the best three days I have ever had with my irons. When I figured it out I hit 50 greens in regulation.  Being on the green all the time makes putting much easier,” she added.